“It begins with absence and desire.

It begins with blood and fear.

It begins with a discovery of witches.” – Deborah Harkness

If you are not yet a fan of the All Souls Trilogy, now is the time to get onboard. Bad Wolf Productions, the company producing the television adaptation, and Deborah Harkness, author of the series, made their first casting announcement today.

To get caught up on all the latest news, Deb kindly provided a wrap-up of today’s announcements and several links to interviews and such:

First up: our Diana and Matthew have been cast! I’m over the moon that Teresa Palmer (Hacksaw Ridge, Berlin Syndrome) and Matthew Goode (Downton Abbey, The Imitation Game) are the lead actors in the A Discovery of Witches series.

UK and Ireland viewers will be able to watch it sometime next year as a Sky Original production made by Bad Wolf TV on Sky 1 and Now TV. Other broadcasters around the globe will be announced in the weeks ahead. WE WILL TELL YOU WHEN WE CAN. WE PROMISE.

Our head writer and showrunner is Kate Brooke (Mr. Selfridge, The Forsyte Saga). I will be introducing you to her more fully on Monday, 28 August, here on Facebook and across my social channels.

Our director for the first episodes is Juan Carlos Medina (The Limehouse Golem, Painless)

You can read the official press release here: https://www.skygroup.sky/…/new-sky-original-production-a-di…

My interview with EW: http://ew.com/…/deborah-harkness-a-discovery-of-witches-ca…/

Filming begins in the next couple of weeks, so more information should start filtering down to the fans. I’m excited to see the first glimpses of the sets and locations, especially the Bodleian Library and, of course, stills of Matthew and Teresa in character.

In other news, fans of the book series held the first ever All Souls Conference in Los Angeles back in September of 2015. You can read all about how much fun we had here. Deb was there, along with Jennifer Ikeda, the wonderful actress who records the audio version of the books, and Thomas Gunter – the actor who played fan-favorite, Scottish vampire Gallowglass for our joyful amusement for the day. See what a blast we had!

Unfortunately, there was no All Souls Con held in 2016, but there is one being held in New Orleans on September 23, 2017. Yours truly will be attending, and you can bet I’ll make a full report from NOLA. Tickets are still available as well as a free live-stream of the event. Deb will be there again along with author/illustrator Colleen Madden and a few other literary guest.

Finally, as a special treat, I whipped up a mini poster in honor of today’s announcement. I hope you like it! 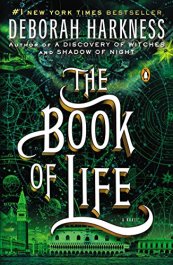 13 thoughts on “A Discovery of Witches Begins”