Due to my tardiness, this is a nutshell recap which I hope will be a fun companion to all the other great recaps and reviews already in circulation.

Outlander Episode 208: THE FOX’S LAIR is written by Anne Kenney and directed by Mike Barker. It’s a beautifully filmed episode as seen in the frame I selected for the header which I think is reminiscent of a Renaissance painting. The episode takes a bit of time to set us up for Season 3, which as everyone not living under a rock (or in Dunbonnet’s Cave) knows, was officially announced this week, along with Season 4. Three (or four) cheers all around.

Jamie’s character, missing for most of the last episode, takes the spotlight in Ep. 208. We  are also introduced to a new character – Jamie’s grandfather, Lord Lovat, and reintroduced to several old ones, including Jenny, Ian, Colum and Jamie’s ex-girlfriend, Leery. I don’t know if that last is an accurate description, but he did touch her breast, so . . .

A nutshell I promised, so let’s get cracking. (I did not just say that.)

Jamie (Sam Heughan) and Claire (Caitriona Balfe) return to Scotland with a pardon so fresh the ink has yet to dry, compliments of King Louie. They are ready to begin their permanent lives as farmers at Lallybroch. I guess their plan is to ignore the impending Jacobite invasion doesn’t happen.

They receive . . . oh, let’s say . . . four whole days without any life-changing drama. The mail arrives. Everyone is happy. A letter from Aunt Jocasta. Who’s that? You’ll find out. Books. Yay. Everyone loves books. A letter from Louise, probably yapping about the baby. And a letter for Jamie. In a nutshell, Prince Charles screws Jamie over by forging his name onto a proclamation declaring himself the divine ruler of Great Britain. Wonderful. Hope the Frasers enjoyed their four days of bliss because it’s the last they’re going to experience for . . . no spoilers from me! And damn it. We do not get the nettles on the hill scene. Oh, well.

Jamie and Claire hit the road. Charlie is expecting Jamie to join him with a large entourage of raw meat for the grinder . . . I mean . . . soldiers for his victorious and sanctified claiming of the crown. To the head of his clan, Jamie must go, against the better judgement of his sister. Grandfather Lovat is a no-good black sheep who attempted to kidnap their mother in order to prevent her marrying their father. Also, he’s an all around unscrupulous Scot only interested in lining his own pockets. Because we’re short a scoundrel, Lord Lovat will do just fine.

Arriving muddy and disheveled, Jamie meets with his grandfather (Clive Russell) in private – Claire being quickly dismissed from the manly political talk. Really, Lovat just wants to talk about her behind her back. Here’s the gist. Jamie wants troops. Lovat wants Lallybroch. Claire is the leverage. (When isn’t she?) If Jamie won’t do what Lovat wants, he’ll have Claire’s honor besmirched. We are all as amused as Jamie by the threat. 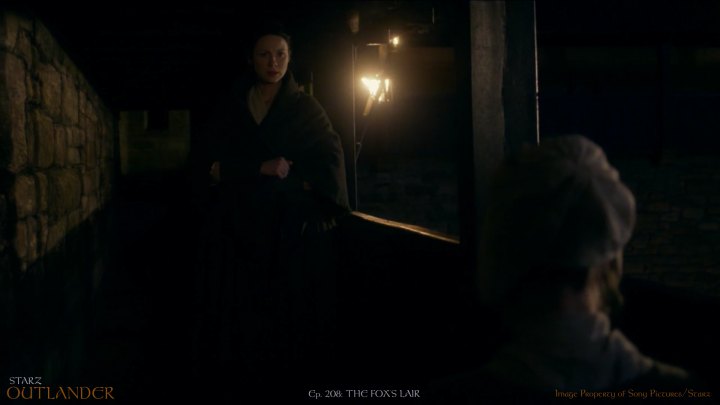 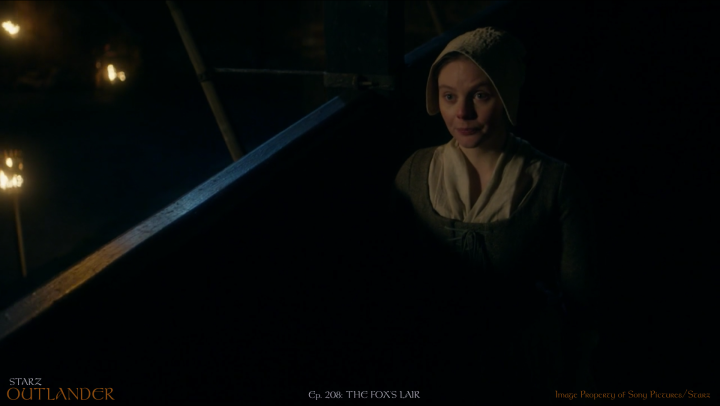 While Claire is surveying Lovat’s castle, she comes across a familiar and unwelcome face – Leery (Nell Hudson) in a maid’s uniform. Well, that part is cool. Leery is very sorry for almost getting Claire burned alive and promising to dance on her ashes. But, pretty please, can Claire forgive her so she can get out of the doghouse with Colum? I don’t need to tell you the outcome of that conversation, but I’m a little surprised it didn’t end with a backhand.

Because I cover almost every scene in the episode in Top 30, let’s skip ahead to the big meeting between the clans. Lovat believes he has Jamie over a barrel and presents two documents for Jamie to choose from – a treaty of neutrality with Clan MacKenzie and a deed of sasine giving Lovat ownership of Lallybroch. Drum roll, please. Jamie is unhappy but willing to sign over Lallybroch to his grandfather in order to save his family and Scotland. He’ll deal with Jenny killing him later. But Claire has a better idea. It seems Lord Lovat is a superstitious man who keeps a seer on staff – another woman for him to push and smack around really. Claire puts on La Dame Blanche for a final performance and feigns a vision of Lovat’s execution at the hands of the Jacobites. Column (Gary Lewis) doesn’t buy it, but Simon Sr. does. Simon Jr. (James Parris), eager to impress Leery who’s been coming onto him with more than a little prodding from Claire, steps forward and offers to take command of his father’s forces if he’s not willing. Young Simon becomes a force of one, plus his personal guard, as it turns out because Lord Lovat, being the greedy bastard he is, signs the pact of neutrality with Colum.

The next morning Jamie heads out with his troop of three plus Claire, after an awkward parting with Leery where he thanks her for what he doesn’t know. I find Leery’s last whispered line of “and your love” to be a tad comical, though the comedy is not intended. Personally, I think Leery’s feelings for Jamie would have come across more effectively with only a longing expression and/or some provocative body language. Despite Leery’s forays into romance, she’s still a child who’s determined to get her way and her man. She doesn’t know how to earn Jamie, nor does she want to take the time to learn how. It’s interesting she has trouble seducing Young Simon when she knew what to do with Jamie by the river. But then, Young Simon seems just as inexperienced.

We’re supposed to turn the other cheek when someone does us wrong, but I don’t believe any of these characters are capable of that because of the extremely emotional circumstances. Leery still feels Jamie was stolen from her. It cannot be beaten from her, nor will she ever forgive Claire. Claire is a woman with enough life experience to know Leery is not to be trusted – ever – even given her youth. Jamie is a guy who happens to have a lot of serious sh*t on his mind, so the last thing he has time for is girl trouble. Given Claire’s request, I think he plays it just right. His wife wants him to make peace but won’t tell him why. He doesn’t have time to argue, so he makes peace. End of storyline . . . for now.

In the end, Lord Lovat meets them on the road with his army of 50 or so (that ain’t going to win the war) and hands over leadership to his son. He’s found himself a win-win situation. If the Jacobites are victorious, he’ll step forward and take credit for the win. If the Jacobites lose, he’ll hide behind the MacKenzie treaty and hopefully get his dirty mitts on Lallybroch. Yep. This is the definition of unscrupulous.

Will Leery ever stop haunting the Frasers? Will Jamie be able to keep Fergus away from the fighting as he promises which I didn’t mention in my nutshell recap because I had to keep it short? Will Lord Lovat meet the end he most deserves? Is there some way we can convince the producers to keep Murtagh around for a few more seasons?

Well, I can’t say tune in next week for the answers because it’s already the week after that week, so I’ll just say . . . stay tuned for more Outlander.

For more goodness on this episode, check out Jamie’s Top 30 Looks from Outlander Ep. 208: THE FOX’S LAIR

One thought on “A True Fan’s Nutshell of Outlander Ep. 208: THE FOX’S LAIR”