As Outlander nears the big finale, I decided to take a look back over the episodes and revisit the posters I created for the second half of the season. The exceptional cinematography and lighting in each episode prompted me to make major updates to all eight posters to include some of my favorite shots.

I love to hear from readers, so let me know what your favorite episodes of the season are so far and why. Thanks so much for reading and supporting my musings!

And because I can never post artwork without doing a bit of yakking, I’ve added very short, itty bitty, mini-recaps for each episode.

The Reckoning puts us inside Jamie Fraser’s mind for the first time and places him in several awkward situations – from settling matters between his two feuding uncles, to facing his old flame Laoghaire back at Castle Leoch, all starting with his rescuing Claire from the fiendish Randall’s clutches.

Of all the landscapes, I especially love the snowy Castle Leoch scenery in this episode – breathtaking. And the setting between Jamie and Laoghaire near the river is very “organic” – her approach (down below) and her departure (here) both being a bit haunting. It’s almost as if she’ll be haunting Claire and Jamie for a long time to come . . .

But the most memorable scene for me is that between Claire and Jamie in the bedchamber where he takes this oath:

“I swear on the cross of my Lord Jesus, and the Holy iron in which I hold, that I give you my fealty and pledge you my loyalty. If ever my hand is raised in rebellion against you again, then I ask that this Holy iron might pierce my heart.”

Episode 110: BY THE PRICKING OF MY THUMBS

Quite an exciting episode – By the Pricking of My Thumbs. Needless to say, our attention is captured in the opening minutes and never wavers throughout.

The story detours a bit from Diana Gabaldon‘s novel in its introduction of the Duke of Sandringham. Jamie is foisted into participating in a “harmless” duel which turns into a dangerous brawl with the MacDonalds.

Claire’s precarious situation becomes even more of a pickle when Jamie is exiled from Castle Leoch, not leaving without bidding a passionate farewell to his new wife. 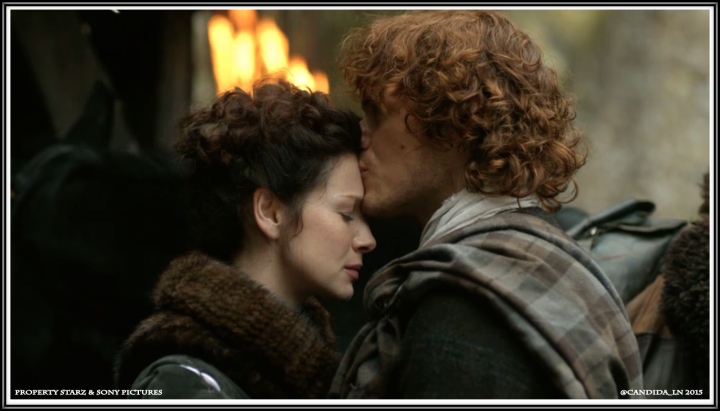 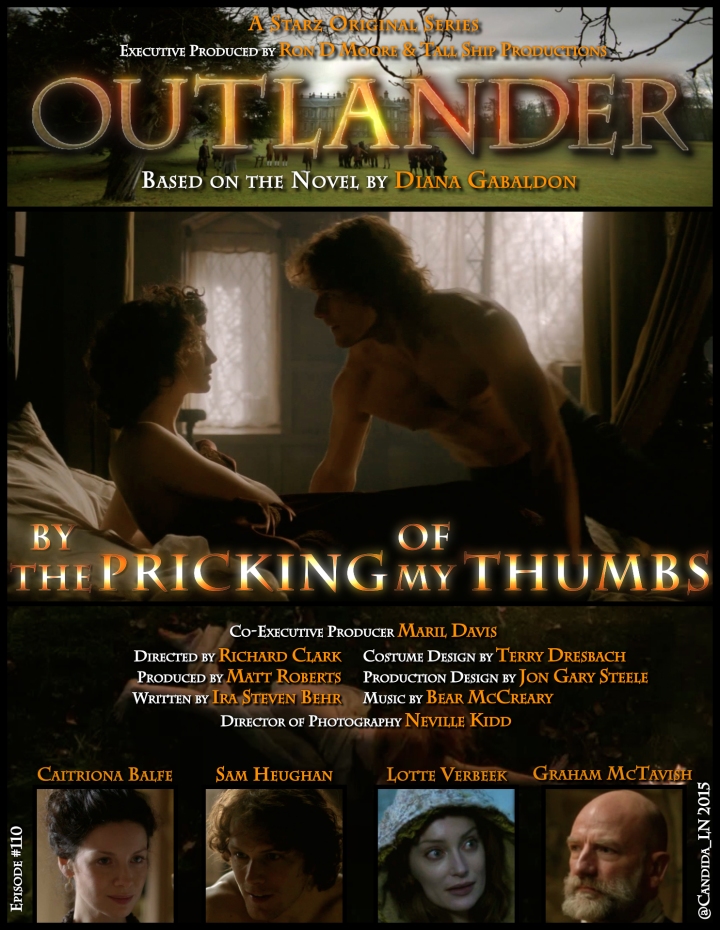 Geillis makes a grand return to the series, dancing mystically in the woods and knocking off her poor husband Arthur. It all sets the stage for her eventual downfall in . . .

The witch trial in The Devil’s Mark is more about magic and superstition than the law, and it shows in this episode with the flashback to Claire attempting to save the faery child in the tree. It’s visually my favorite scene in the episode with its stunning dreamlike quality.

Perhaps the most pivotal moments in the story occur following the daring escape from the trial. Jamie learns the truth about Claire’s origins, then leaves her with the choice to stay or return to the 20th century.

Like Geillis’ entrance, she makes a grand exit in this episode by throwing herself on the mercy of the merciless court to save Claire and Jamie from the hungry mob.

In Lallybroch, Jamie is reunited with his family, though tensions run high. Not only do bad memories abound, but Jamie has difficulty fitting back into his old life. Eventually, the sibling blood ties are repaired . . . 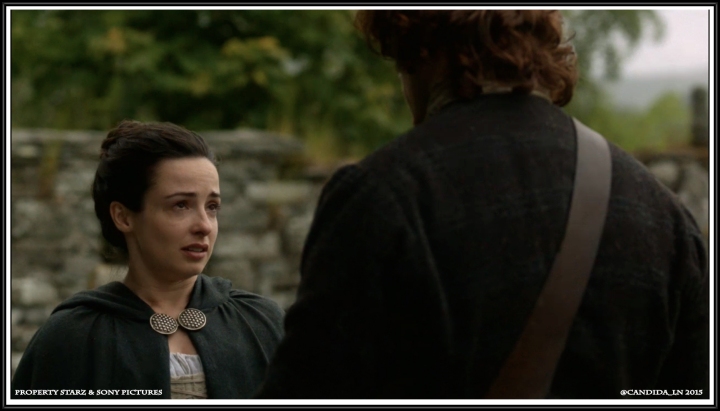 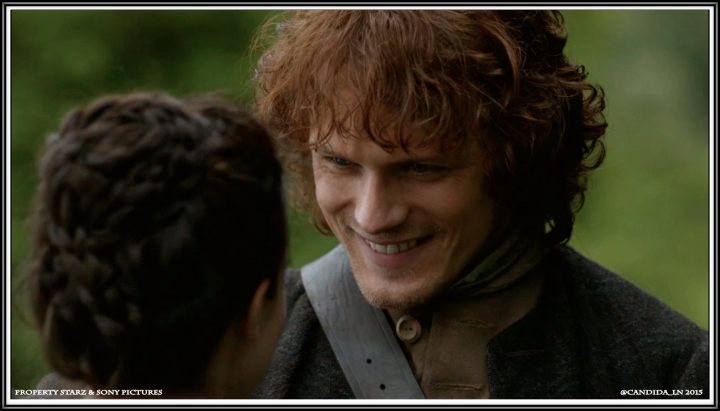 and  Jamie and Claire manage to carve out a place for themselves. Within the comforting walls of Jamie’s family home, they declare their love for one another for the first time.

As Scotland itself plays a key role in the series, Lallybroch plays a central role in this episode. Its grandeur is not what we expected, but it certainly explains why everyone wants what Jamie has as we learn in . . .

The Watch is one of the most entertaining episodes of S1 P2 with the introduction of Taran MacQuarrie and the return of “blue eyes” Horrocks. Taran is an honorable sort of scoundrel, much like Han Solo, who likes putting his feet up at mansion Lallybroch. Horrocks is more like Boba Fett, out to screw over anyone who gets in his way of pilfering a cushy life.

Jamie faces off against his latest perils while Claire midwifes Jenny’s troublesome delivery over a discussion of “What does it feel like to be pregnant?”

This episode showcases some of my favorite lighting of the season, especially during the Jenny/Claire scene and during Claire and Jamie’s farewell below – the last time we see our handsome hero for a bit. 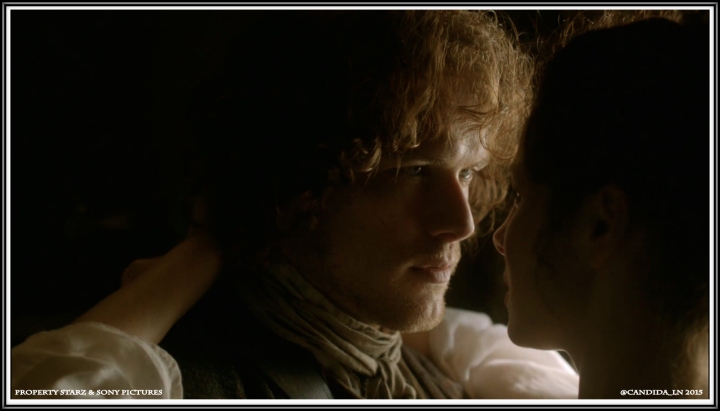 The Search rounds out the mini-trilogy with Lallybroch and The Watch, and brings Murtagh Fraser back into the fold – with a wallop of vengeance and a breath of amusement.

Murtagh puts on his dancing shoes, proving once again there is nothing he will not do for his godson Jamie. 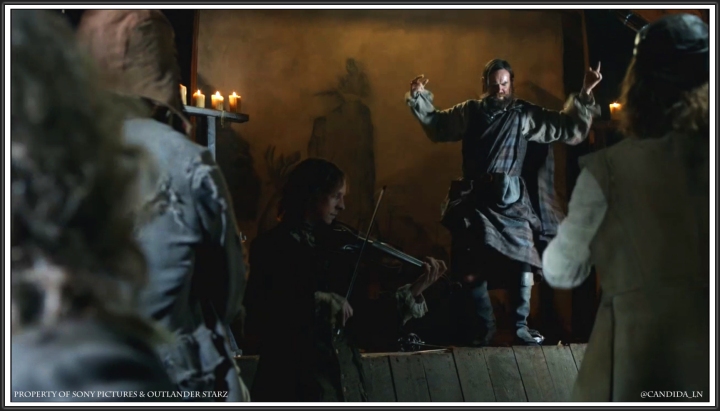 This episode slows the tempo down a tad and gives us a break before the emotional scenes to come. But it doesn’t tap down the emotions too much, as in the touching scene between Claire and Murtagh in the cave when he tells her of his lost love, Ellen.

Wentworth Prison presents some of my favorite photography of the entire season, especially impressive given the restricted environments. The use of candle light in The Wedding episode yielded a romantic and enchanting ambiance, whereas the torch lighting in the prison creates an adversely eerie and stark atmosphere.

The result is my favorite shot of the season (so far) – Randall’s hand reaching out toward Jamie’s back –– Randall striving to exert control over Jamie in unimaginable ways. 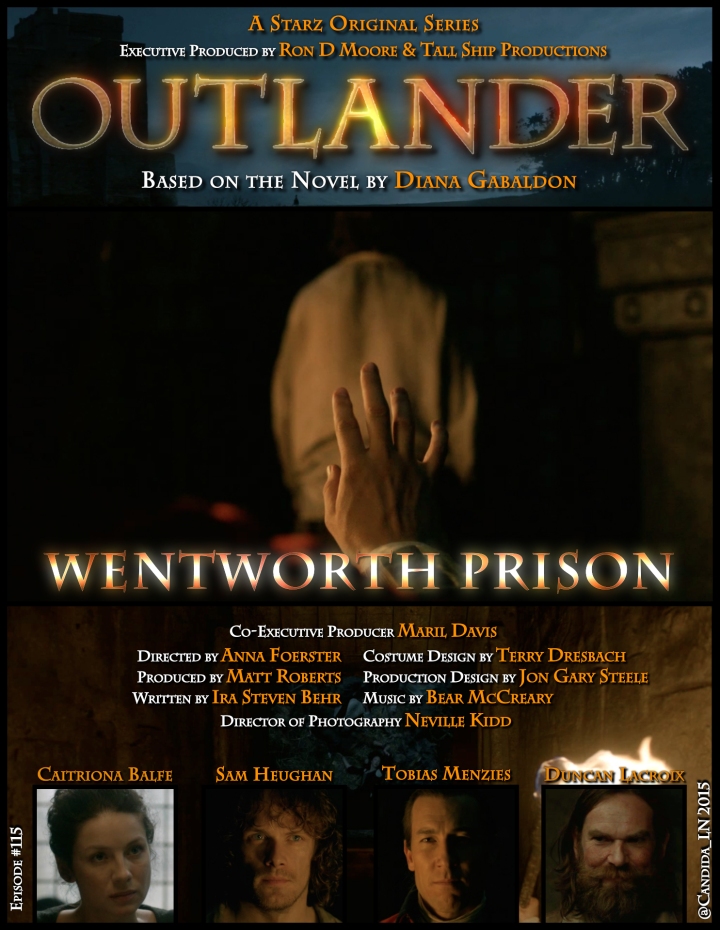 Claire has her moment of dominance over Randall when she bestows upon him the knowledge of the day of his death, before she is shoved onto a pit of bodies heaped under the prison.

But real power lies in the eyes, which Jamie shows throughout the episode, especially in our last look of a man who gives up everything he values . . . for love. 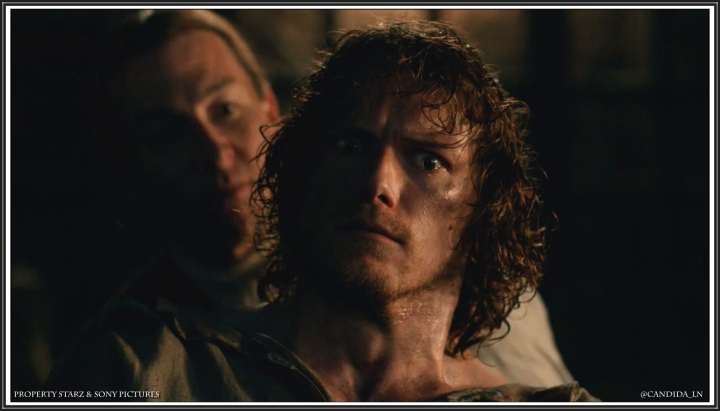 In To Ransom a Man’s Soul, we come to the end of the season, but not the end of the story. Thank goodness. There is both darkness and illumination in this episode. Diana Gabaldon tears down her characters, so they can build themselves back up again. Without giving away too much . . .

Randall receives what he’s always wanted, but I’m not convinced it’s what he expects.

Jamie sacrifices himself, but in a way he definitely doesn’t expect. 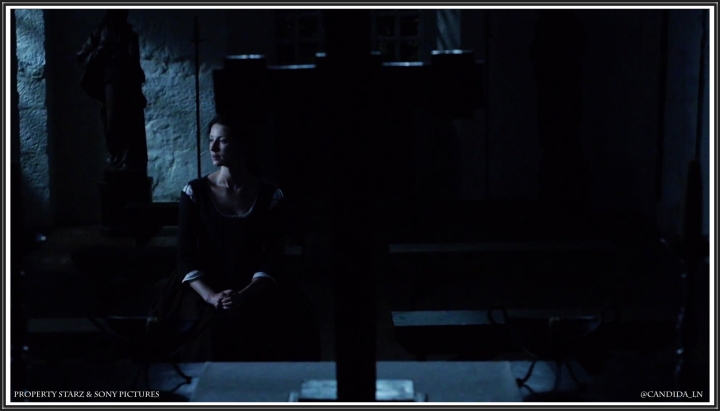 Claire faces the greatest challenge of all, saving not only Jamie’s life, but his heart and soul as well.