Here’s a collection of tweets from the Television Critics Association Outlander panel in Pasadena. I did not post every tweet from each journalist, but I covered all the perspectives from Jolie Lash, TV Guide and a few others. I’ve also posted a few bonny pics from the event. 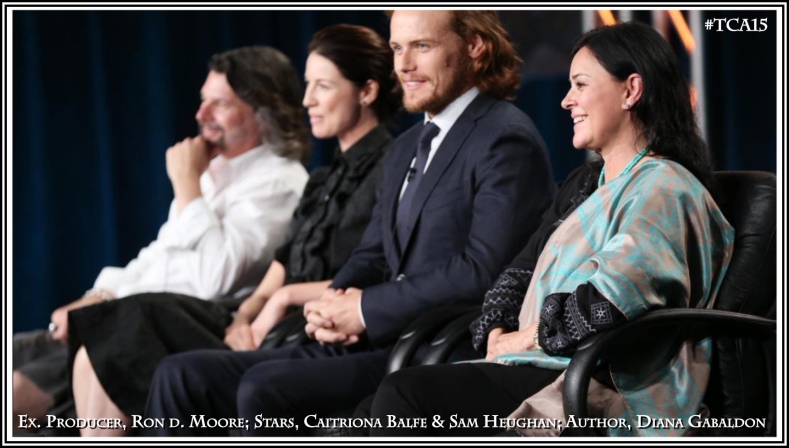 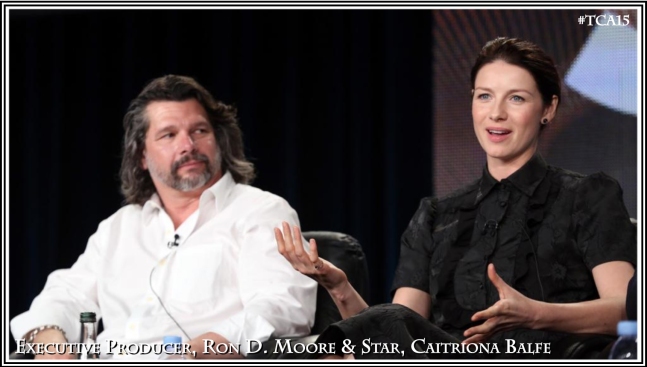 A full minute of the #Outlander premiere will air during the #BlackSails premiere on January 24. #TCA15

@Outlander_Starz #TCA15 panel starting. @RonDMoore @Writer_DG @SamHeughan & @caitrionambalfe are on stage. So honored to work on this show!

Ron Moore is again sporting a kilt for the TCA #Outlander panel, just as he did when the series was here last year. #TCA15

I think we can all agree the #Outlander Season 1b trailer looks freaking fantastic, right? #TCA15

#Outlander fans will be able to watch a full minute from the midseason premiere during the #BlackSail premiere on Jan. 24 #TCA15 #STARZ

Could swear there was moment of silence after the #Outlander preview clip ended. Even critics can be awed by something truly amazing. #TCA15

The @Outlander_Starz cast is in the house for #TCA15. Stay tuned for updates about the show! Or just, how @SamHeughan looks in a suit.

Ron Moore wants the show to be accessible to people who've read the books AND to people who have not. #Outlander #STarz #TCA15

Has had episodes that are a single chapter, some that are several. Just works differently sometimes. #TCA15

FYI: the first #Outlander episode back has Jamie, not Clair, doing the voiceover. #TCA15

"The show beyond Season 1 is really about Jamie and Claire together," says #Outlander EP @RonDMoore #TCA15

#Outlander S1 encompasses the entire first book per Moore. There'll be an episode from Jamie's POV in back part of season. #TCA15

.@RonDMoore said they don't make changes unless they have to. #Outlander (when asked about making changes from Diana's books) #TCA15

As Season 1B starts, the 1st episode includes Jamie voice-over. For subsequent episodes, #Outlander returns to voice-overs by Claire. #TCA15

"This character showed me how much strength and resilience I have. Claire has brought my inner strength out" – @caitrionambalfe #TCA15

Caitrona Balfe says she's grown from playing Claire. It's brought her inner strength out. Sam says "It's aged us too!" (laughs) #TCA15

"It showed me how much strength and resilience I have," Caitriona Balfe says of the impact her #Outlander character has had on her #TCA15

"They've done beautifully. They're much, much better than I ever thought they'd be" @Writer_DG says of @SamHeughan & @caitrionambalfe #TCA15

#Outlander author Diana Gabaldon says the show's stars "are much, much better than I'd thought they'd be." #TCA15 #STARZ

Diana Gabaldon on the #Outlander cast: I know lots of people that I didn't want. @Outlander_Starz #TCA15

Diana Gabaldon: Sam & Caitriona have done beautifully – they've done much better than I ever thought they would. #Outlander #TCA15

"Claire and Caitriona I keep kinda separate. He kind of flickers in and out for me." – @Writer_DG on #Outlander actors #TCA15

Diana Gabaldon recalled how ecstatic she was once saw how perfectly cast Caitriona/Sam were for the roles of Claire&Jamie. #Outlander #TCA15

"Caitriona and Claire are always easy to keep separate. [Sam] flickers in and out for me," says @Writer_DG #Outlander #TCA15

.@Writer_DG is still so in love with the casting of Sam & Caitriona. Sweet. #Outlander #tca15

"In the second part of the season, we find out a lot more about Jamie. We see his stubborn side & his pride" – @SamHeughan #Outlander #TCA15

Sam Heughan on Jamie: He's less idealistic in the 2nd half of the season. We start to see his failings. #outlander @Outlander_Starz #TCA15

Sam Heughan: Jamie learns a lot in 2nd part of season. I'm trying to do that too. #Outlander #TCA15

Sam Heughan: The cracks in Jamie's armor will begin to show in the second half of #Outlander's first season. #TCA15

"We start seeing his failings," Sam Heughan says about Jamie in the second half of the season. #Outlander #TCA15 #STARZ

Diana Gabaldon is writing the 9th #Outlander book now — Claire and Jamie are in their 60s. #TCA15

I somehow think Outlander fans are going to have no worries about Gabaldon staying ahead of the show with the books. #TCA15

.@Writer_DG talks about how she's writing J&C in their 60s now. And she notes she turns 63 on Sunday #Outlander #TCA15

New episodes will show Jamie's stuborrn side, his pride. We start to see the chinks in his armor. #Outlander #TCA15

Heughan: In the second half of the season, he's finding his place in the world. He's got a lot of responsibilities. #Outlander #TCA15

"The TV show has brought me a lot more male readers. 47% of our viewers are male" says @Writer_DG #Outlander #TCA15

"I think that just adds a great realism to it," #Outlander's Caitriona Balfe says about shooting in cold Scotland. #TCA15

Caitriona Balfe on shooting in Scotland: It's cold, it's rainy, but it's vital. I never complain. #Outlander #TCA15 @Outlander_Starz

Sorry lassies I'm really far back! But a lil something for you! #Outlander #TCA15 pic.twitter.com/tlhpAAMBKC

… they are currently looking for places to shoot exteriors #Outlander #TCA15

Sam Heughan on his prosthetic scars: We spend a lot of time rolling around on the floor, so it does get a bit damaged. #Outlander #TCA15

.@SamHeughan talking about back stuff he wears 4 show. Says prosthetics have held up well #Outlander #TCA15

And now we're getting the dirt on the prosthetic scarring on Jamie's back. Takes two hours to apply. #Outlander #TCA15

"In the second part of the season, Jamie goes through a lot of injuries. It will be shocking" says @SamHeughan #Outlander #TCA15

Jamie goes through a lot of injuries in the second half of the season, Sam Heughan says, especially the last few episodes. #Outlander #TCA15

Expect more Frank in S2, but not so much as S1 continues Ron said. #Outlander #TCA15

We’re only just now getting to a place where contracts and shooting schedules are flexible enough to allow for that. #TCA15 #Outlander

#Outlander has a full time historian on set that consults with all the scripts, says @RonDMoore #TCA15

Sam Heughan has full body prosthetics for the end of the season. Hope that means more fight scenes, 'cause that stuff's legit. #TCA15

& @SamHeughan gives a shout out to @draiochta14 who has "done a fantastic job with the costumes." #Outlander #TCA15

Fact: @SamHeughan makes 90% of the men on Earth look like goblins. #outlander #tca15

@SamHeughan says the costuming really sets the scene for them and makes them feel authentic. @Outlander_Starz #TCA15

#Outlander EP Ron Moore is wearing a kilt on the panel.
"I just wanted to have some kilts because, hey, that's what I'm doing now." #TCA15

Cait says "we have to look at it in the mind frame of 1743." #Outlander #TCA15 Says they didn't want to take it lightly.

.@caitrionambalfe on the #Outlander spanking scene: "We wanted to approach it respectfully. We talked a lot about it." #TCA15

Spanking scene was choreographed and @caitrionambalfe says Claire finds it hard to wrap her mind around what Jamie is about to do. #tca15

"We tried to give it the respect it deserved." Cait says about spanking scene #Outlander #TCA15

Sam Heughan on the spanking scene: They both learn a lot about their relationship. It strengthens the relationship. #Outlander #TCA15

"Claire has a hard time wrapping her mind around what this man she is in love with is about to do." Actress Catriona Balfe #Starz #TCA15

That's it for the #Outlander panel and a wrap for today at #TCA15. More tweets tomorrow – thanks so much for following & for all the RTs!