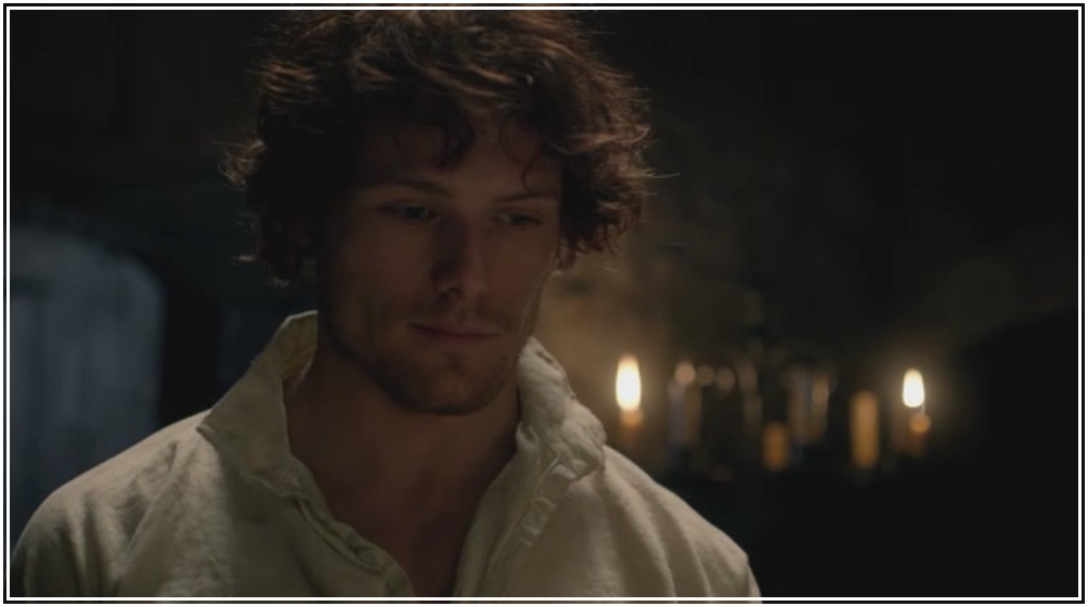 Outlander Episode #104: THE GATHERING presented an array of dramatic looks based on superb performances by the entire cast. The character arc for Jamie Fraser (Sam Heughan) delivered him into his full-fledged manhood.

While I very much enjoyed his lovey-dovey looks from THE WAY OUT, his soul-baring looks from CASTLE LEOCH, and his bloody-sexy looks from SASSENACH, I was astounded by his courageous and heart-felt looks in THE GATHERING.

As I state in my review, this is my favorite episode thus far because it focuses on the intricacies of the plot while advancing Jamie and Claire’s (Caitriona Balfe) relationship in a way that’s not obvious. Jamie and Claire have been on different paths since they first met, but the night of the Gathering brings them together in a way neither of them expected.

Here is my list of Jamie’s Top 30 Looks for THE GATHERING. As predicted, the selections get more difficult each week. I’m sure #1 will be no surprise to those who watched the show, but I hope I captured a few unexpected ones for your viewing pleasure. Let’s begin.

#30: Jamie’s I’m Swearing An Oath But I’m Not Face – Thought I’d start with one that pictorializes the entire episode. “We are gathered here today . . .” Well, we’re gathered, just not for that. 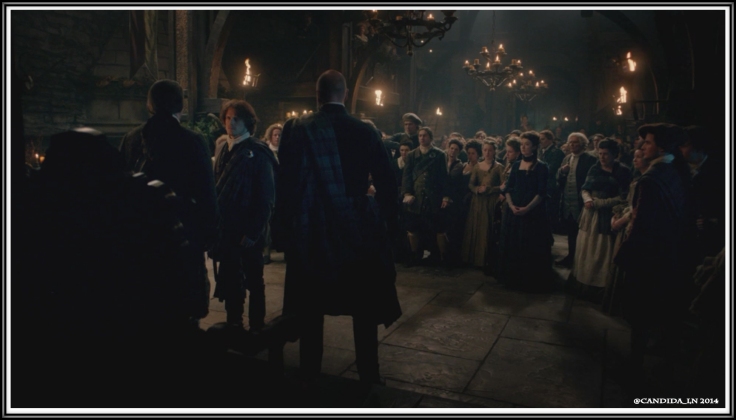 #29: Jamie’s Thanks For Fixing My Scratches Face – Let’s play a little word association game, shall we? 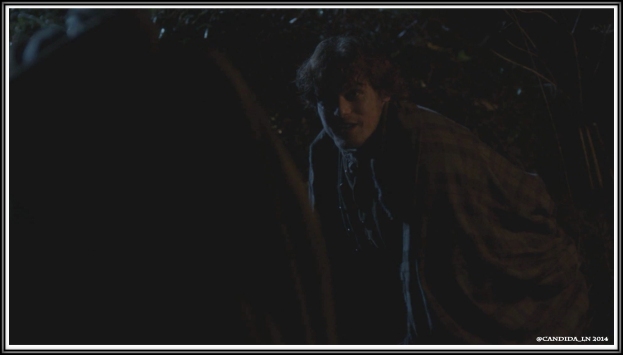 #28: Jamie’s That’s My Lassie! Face – Everyone keeps putting their hands on Claire except Jamie. What is wrong with this show?! 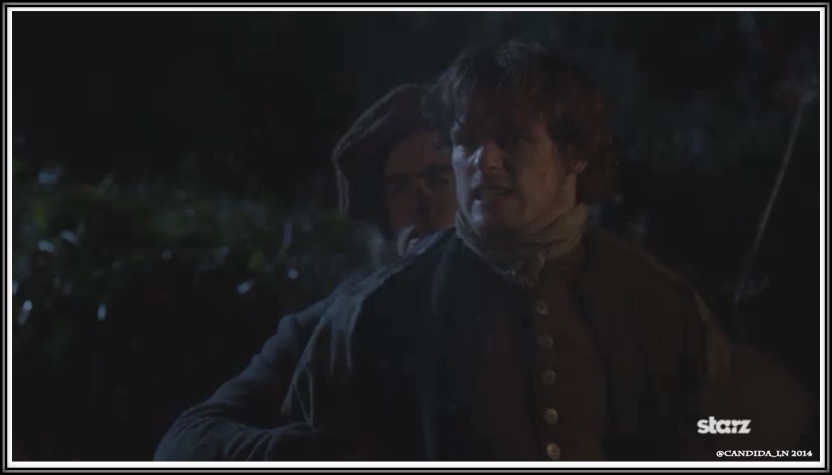 #27: Jamie’s I Win Face – Ah, there’s nothing like burning off a little steam by WWFing your uncle and body slamming him to the ground for the win.

#26: Jamie’s Watch Out! Face – Oh, for Pete’s sake. Poor Jamie finally gets his hands on Claire and Wham! He’s knocked out cold by a dastardly Rupert. Come on, Claire. You should have pulled him down on top of you, then held him there – just until you knew it was safe. An hour or two would have done it. 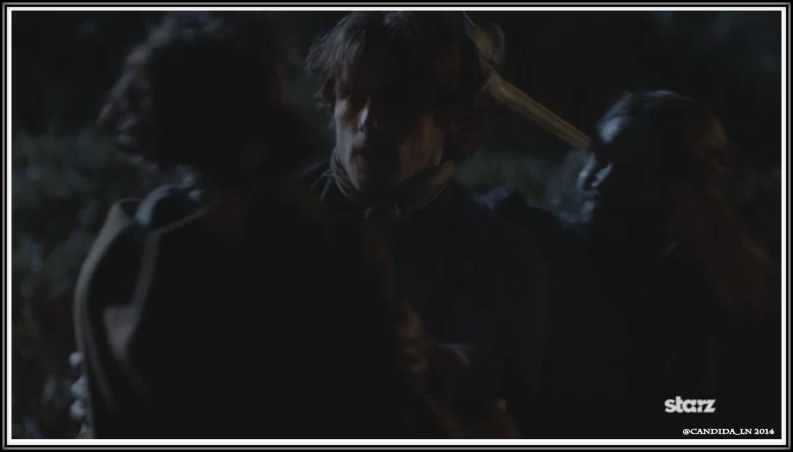 #25: Jamie’s Come And Get It Face – Jamie and Dougal (Graham McTavish) have been eyeballing each other for four episodes. It’s time for the smackdown – Outlander style. 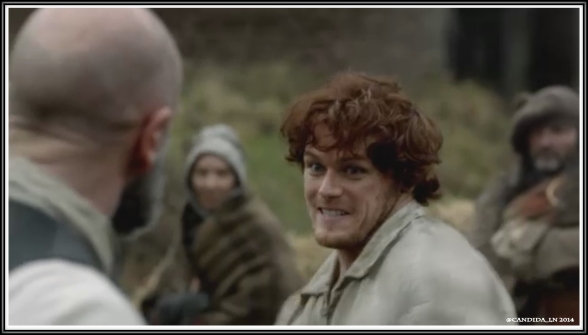 #24: Jamie’s Dougal Touched You? Face – Even Jamie’s uncle got to Claire before he did. Damn it, man! Make your move. 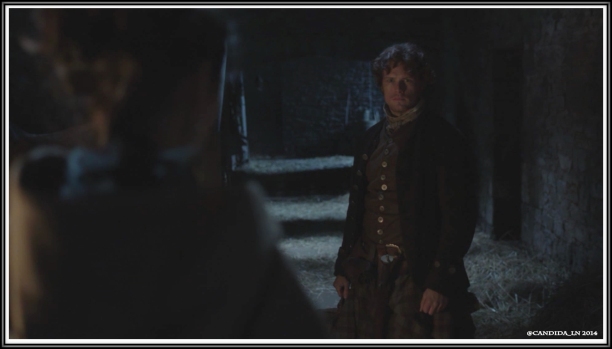 #23: Jamie’s He Was Drunk? Face – Whew! What a relief. Well then, he won’t remember trying to take advantage of you, Claire. Too bad that doesn’t help Claire wipe away the memory of almost being raped – again! 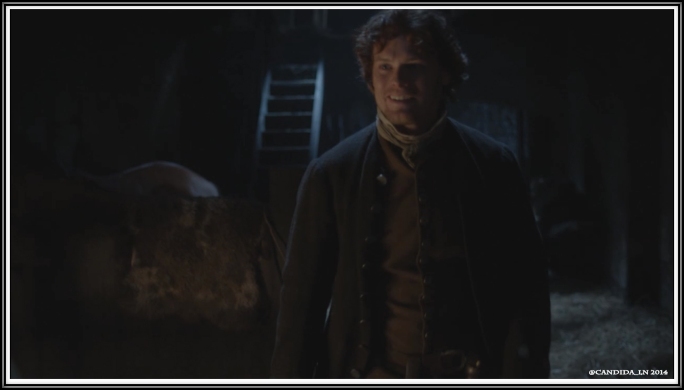 #22: Jamie’s How The Hell Do I Get Out Of This One? Face – Poor Jamie. No girlfriend. No wife. A bounty on his head. Can’t go home. Can’t stay. He swears an oath to Colum (Gary Lewis) – he dies. He doesn’t swear an oath to Colum – he dies. This guy needs a break. 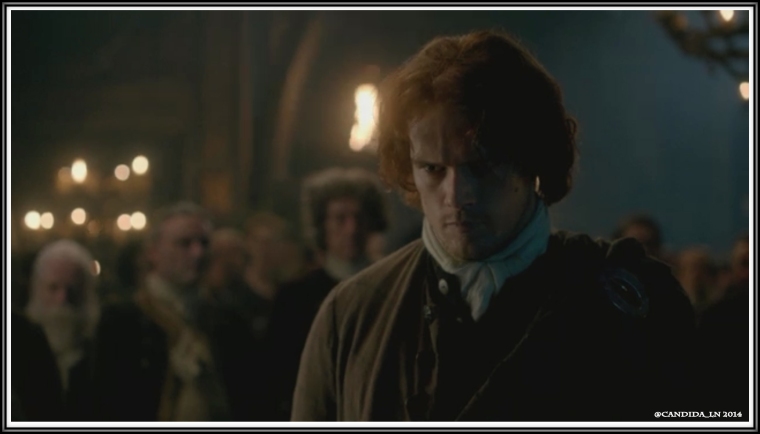 #21: Jamie’s Let Me Change Before The Gathering Face – I couldn’t agree more. Jamie is very, very dirty. He needs to be bathed and dressed. Mrs. Fitz is busy. I’ll do it. An hour or two should be fine. 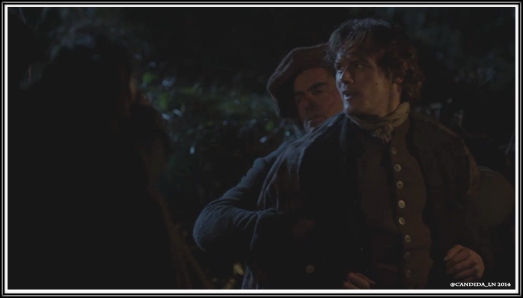 #20: Jamie’s That’ll Teach Ye To Mess With Me Face – Jamie’s 3-0 against Dougal. Unfortunately, we know Dougal has a way to get back at him. 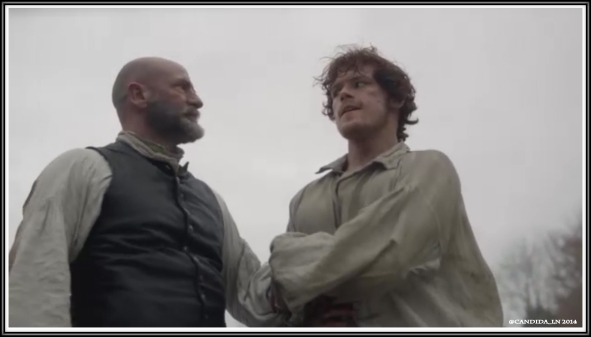 #19: Jamie’s Jamie Versus Dougal Face – I love the timing of this shot. The two men make their way to the front of the hall, pretending not to notice one another. No words here but strong emotions are exchanged in the tense environment. Plus, Jamie looks really hot. 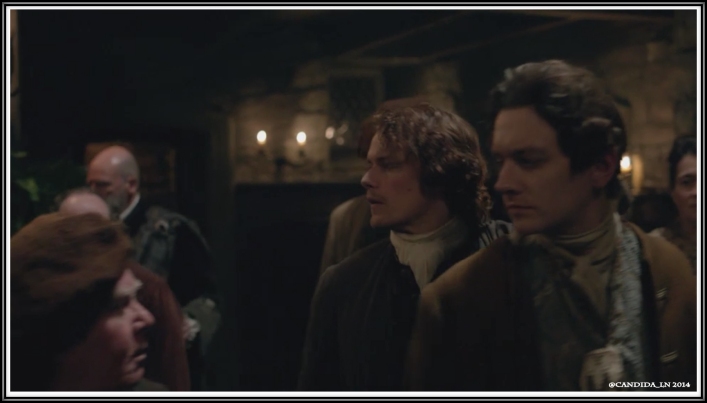 #18: Jamie’s I’ll Take Ye Face – This is the last playful moment before things get really rough. It’s all fun and games until someone takes a shinty stick to the wrong balls. 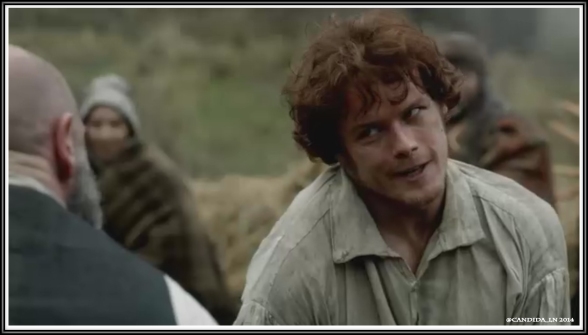 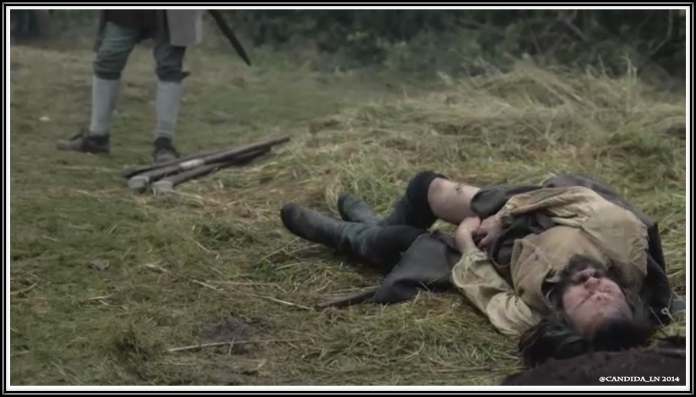 #17: Jamie’s That Was Fun Humiliating You Face – Well deserved, lad. 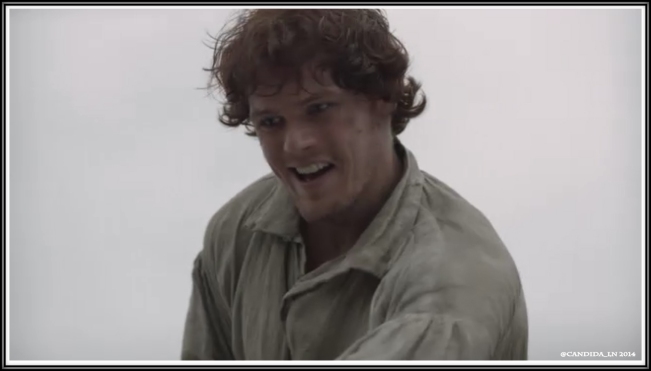 #16: Jamie’s I Got Outta That One Face – Yes, we all knew Jamie would prevail, but what a performance! 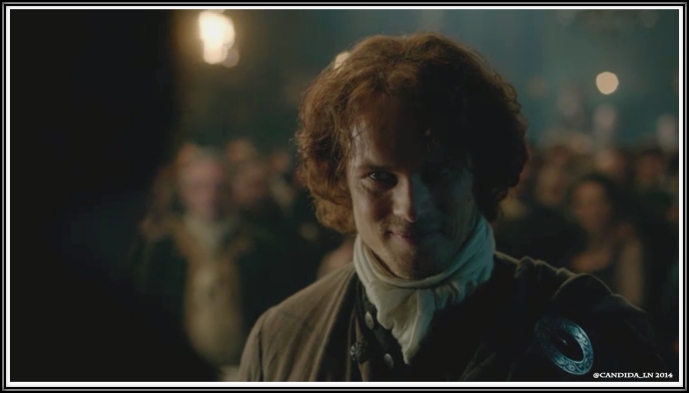 #15: Jamie’s I Can’t Wear This Face – You know, you’re right. I did a terrible job picking out your clothes, Jamie. Let’s go back to your room and try it again. Won’t take but an hour or two. 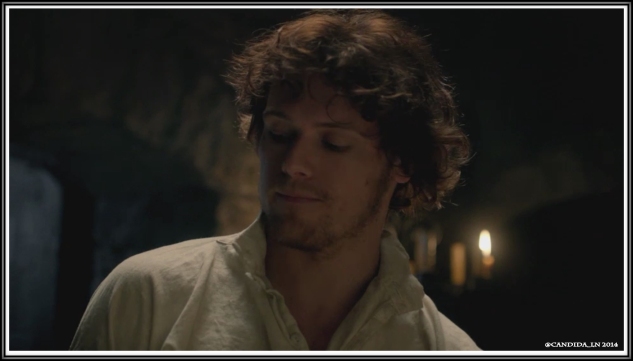 #14: Jamie’s He’s Looking At Her Face – Things are happening. Jamie’s still staring at Claire, but the look has changed. And he’s not the only one doing the checking out. See #13. 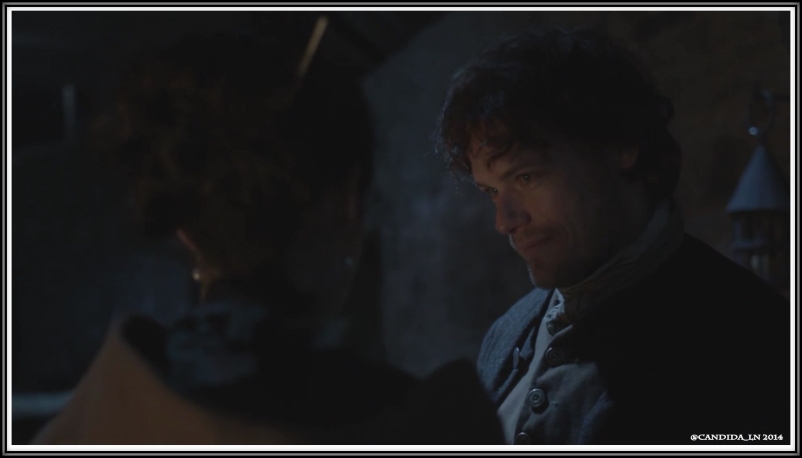 #13: Jamie’s She’s Looking At You Face – I know Jamie’s smiling face is off to the side, but this look is all about Claire. She’s looking at Jamie, and she likes what she sees. Who’s got puppy dog eyes this time? 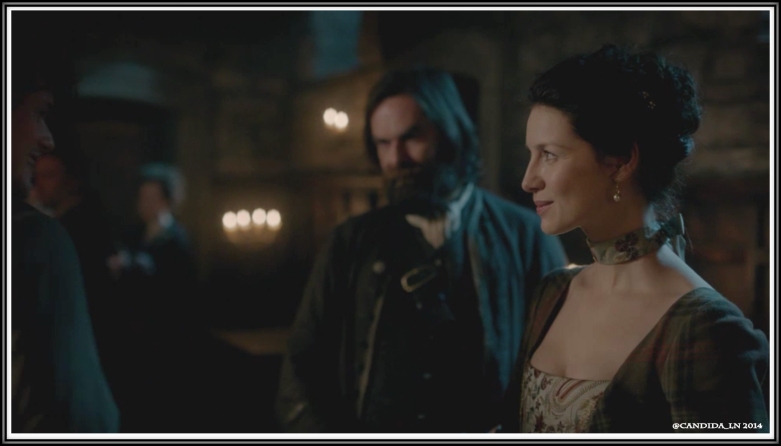 #12: Jamie’s Who’s Next? Face – Me! Me! Me! I’m next. Can you do that thing where you wrap your arms around me and hold on tight? Is it okay if I don’t fight back? Then, when you throw me to the ground, can you kind of lie on top of me? 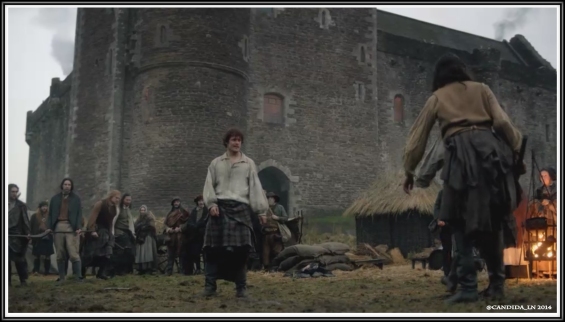 #11: Jamie’s Why Does She Keep Talking About Leaving? Face – Well, geez, man. Maybe if you kissed her, she’d stop talking about leaving. Ever think of that? 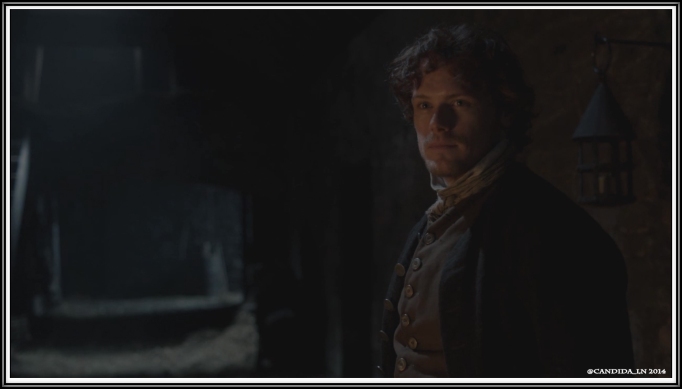 Welcome to the Top Ten of Jamie’s Looks for THE GATHERING. 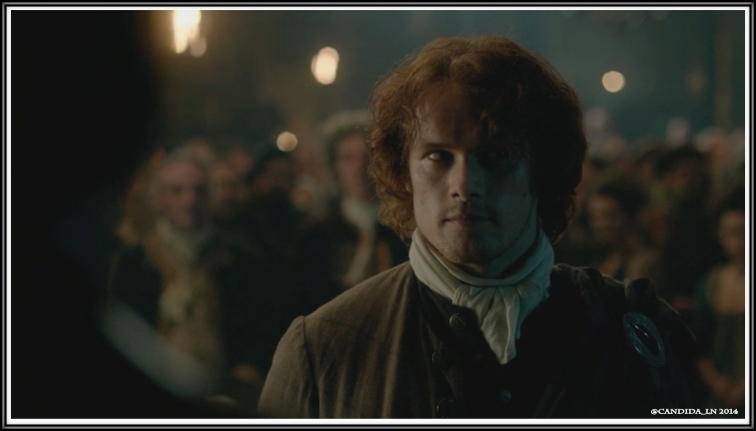 #9: Jamie’s I’ve Got Something To Show You Face – Is it bigger than a bread box? Also, we can’t see Claire’s face, but she doesn’t look to be in any hurry to get up. Go with it, lass. 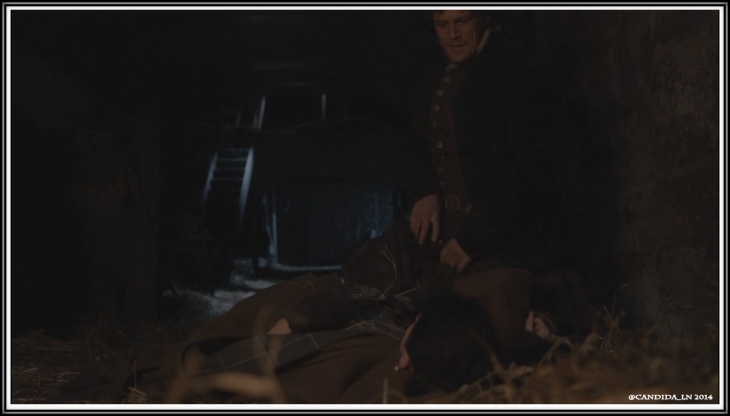 #8: Jamie’s Quiet Thoughts Face – This lad has a lot on his mind tonight. He’s tried so hard to stay away from Claire, then Boom! She’s in his thoughts again, yammering about leaving. 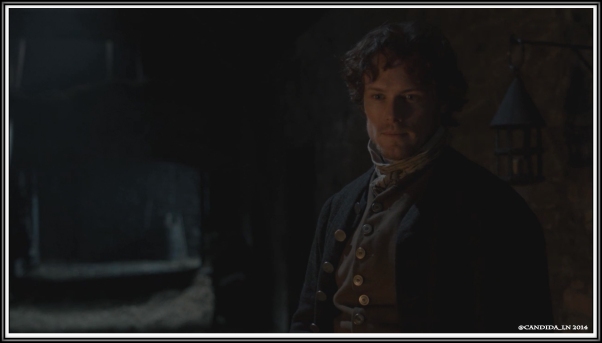 #7: Jamie’s My Head Is Harder Than An Iron Pot Face – Well, because you brought it up . . .  have anything else harder than an iron pot? Inquiring minds want to know. 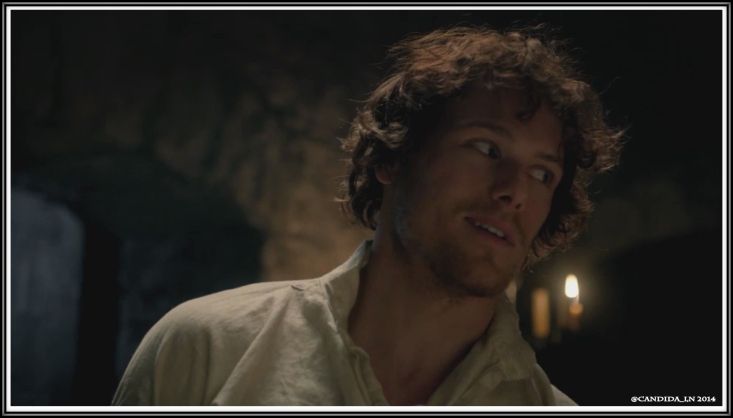 #6: Jamie’s I’m Sorry Claire Face – The only thing sweeter than hearing the word Sassenach on Jamie’s lips is Claire. Don’t know what it is about the way he says it, but yum. You know, Claire and Candida both start with a C . . . 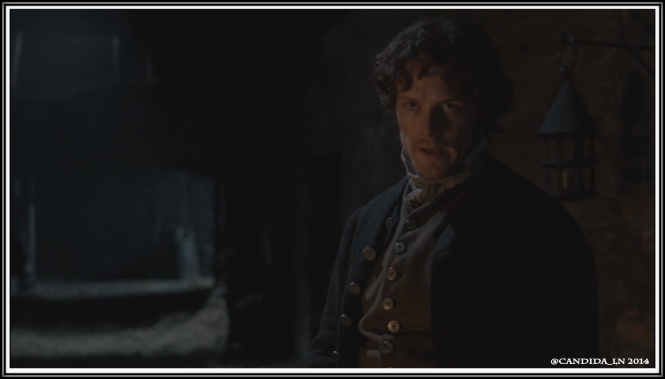 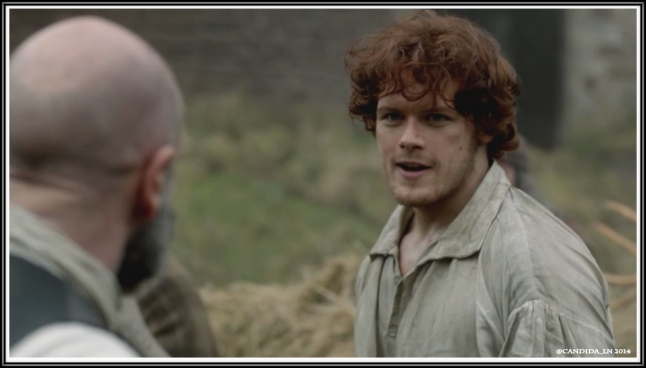 #4: Jamie’s It’s Just Me Face – This shot reminds me of all the times Jamie springs out of bed armed with a dagger, crouching in combat mode – ‘cept he’s usually naked. What’s wrong with this show?! 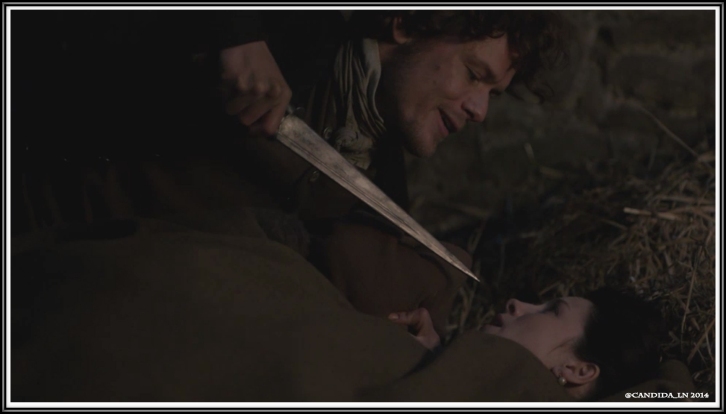 #3: Jamie’s I Might Die Tonight Face – Yeah, he might die tonight, but he’ll die sexy as hell. 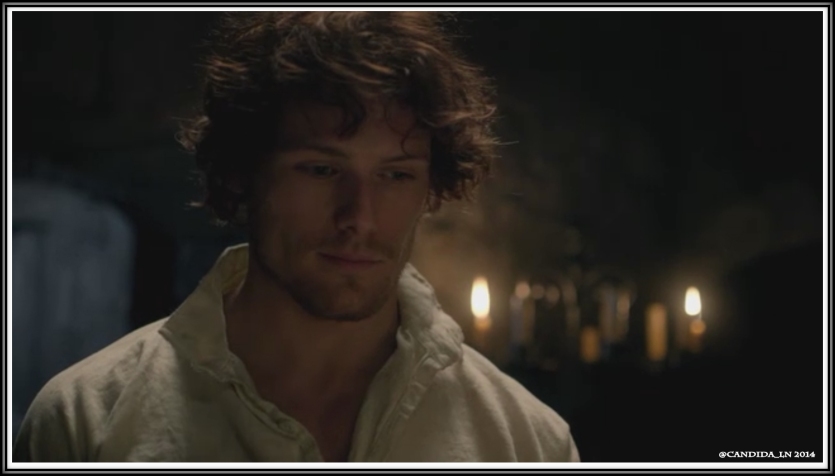 #2: Jamie’s Take It Or Leave It Face – This is the pivotal moment of the show. Jamie’s just sworn his allegiance without swearing an oath to clan MacKenzie. The man knows how to put on an intense look. There’s no time for moony-eyed stares when everyone around you wants to put a dagger in your back. 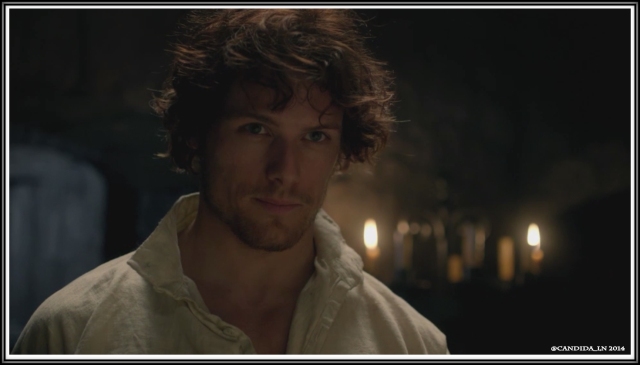 Being my favorite episode thus far, makes this Top 30 list also my favorite. Most of Jamie’s looks had to do with his complicated life. As fans, we already know everything about him, but it was wonderful to meet the real JAMMF tonight.

Outlander Episode #105: RENT airs on Starz on Saturday, 6 September in the U.S.

My recapped review for Ep104 is also available, here: A True Fan’s Review of Outlander Episode #104: THE GATHERING

50 thoughts on “Jamie’s Top 30 Looks from #Outlander Episode 104: THE GATHERING”