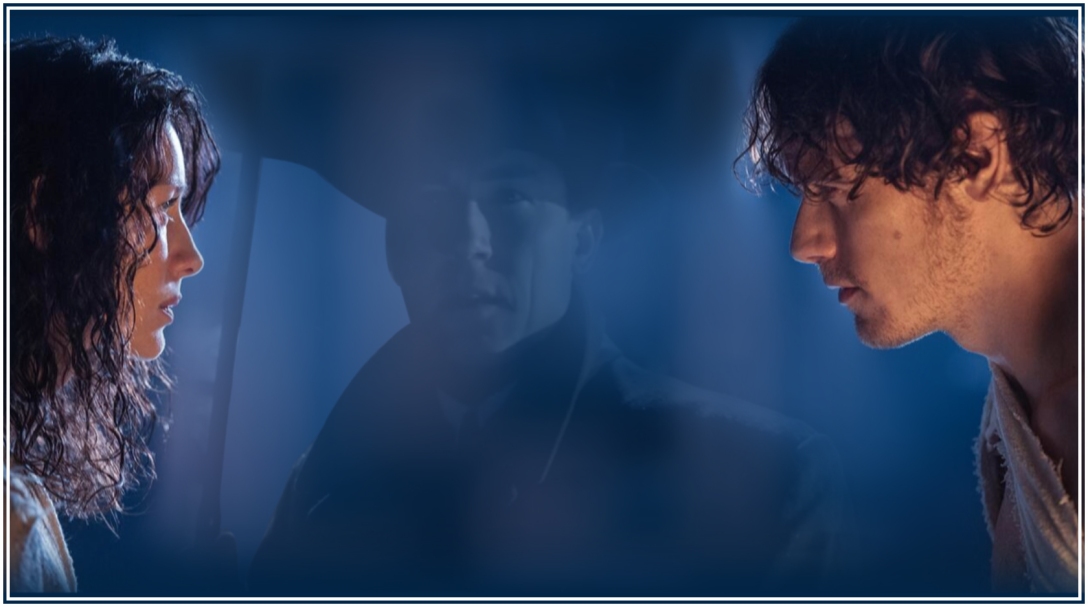 The series premiere  of Outlander– based on the novel by Diana Gabaldon – is fast approaching in the US, Canada & Australia – BUT we still do NOT have a date for our friends in the UK and other countries across the globe. We continue to plead and campaign on their behalf, hoping the networks will answer our call soon.

The even faster approaching red carpet premiere in San Diego inspired me to have a little fun with all the beautiful photographs, trailers, and behind-the-scenes featurettes released by Outlander Starz over the past few months.

The following are my visions of posters for the first 8 episodes. I’ve attempted to be accurate with respect to the credits, but not all information for each block has yet been released. In other words, these are for ‘entertainment purposes only,’ especially where the summaries are concerned as I’ve expanded them with my own guesses based on the novel. Whether my summaries are correct, they definitely contain SPOILERS for those who have never read the novel.

Summary: WWII combat nurse Claire Randall (Caitriona Balfe) is on her second honeymoon in Inverness with her husband, Frank Randall (Tobias Menzies) when she is mysteriously transported from 1945 to 18th Century Scotland. Almost immediately upon arrival, she finds herself in danger – first running from a squad of trigger-happy Redcoats, then from her blood-thirsty husband’s six-time great grandfather. Next, she is kidnapped by a group of Highlanders led by Dougal MacKenzie (Graham McTavish) and is taken to a cottage where where she meets an injured young man by the name of Jamie McTavish (Sam Heughan). Compelled by her duty to care for wounded warriors, Claire takes him under her charge during their journey to Castle Leoch. [And this is where we begin saying, “Poor Frank.”] 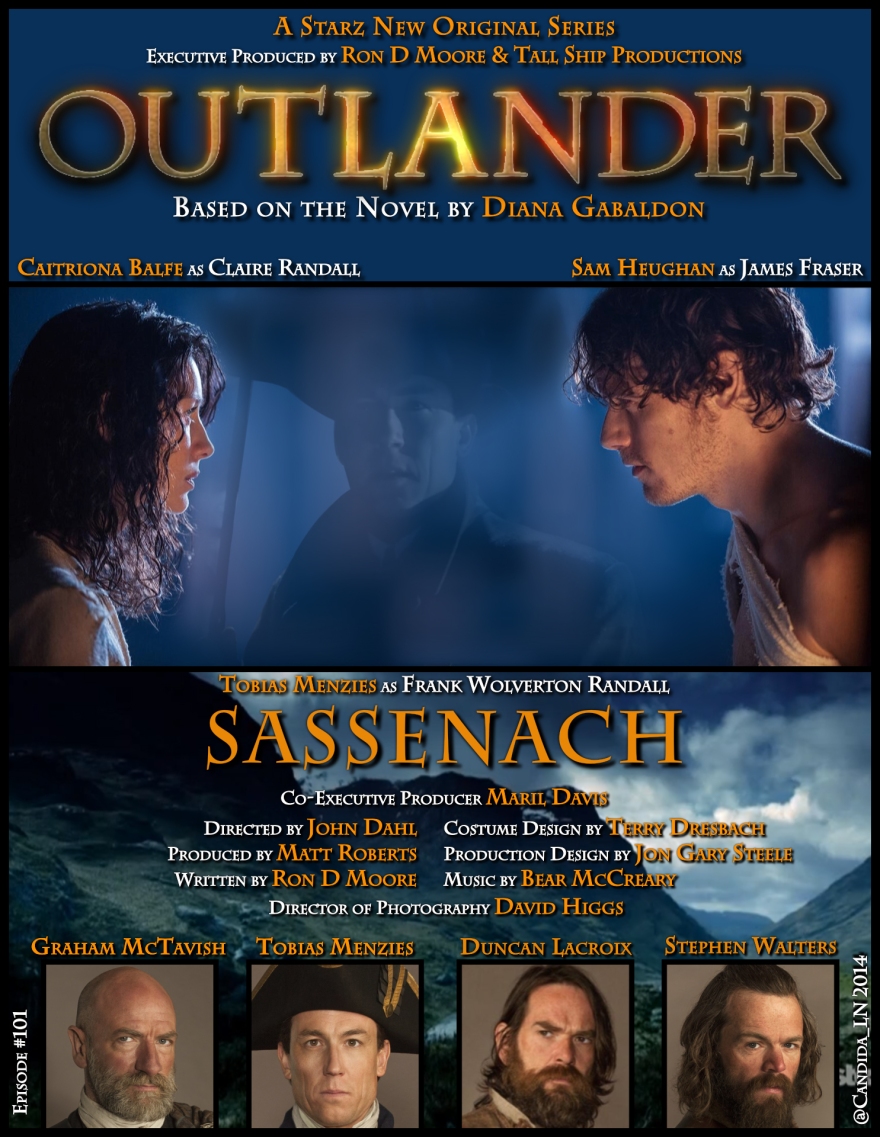 Summary: Now a guest of the MacKenzie clan, Claire (Caitriona Balfe) is taken to meet the Laird, Colum MacKenzie (Gary Lewis), and confirms she has somehow traveled to 1743 Scotland. As suspicions about her strange appearance and manners grow, Claire befriends the equally mysterious Geillis Duncan (Lotte Verbeek), wife of the Cranesmuir procurator fiscal, Arthur Duncan. Her friendship with Jamie (Sam Heughan) also continues to develop, leaving her shocked to watch him take the punishment for Laoghaire MacKenzie (Nell Hudson) one evening in Leoch hall. Despite everyone’s suspicions, when the clan discover her medical skills, Claire’s status changes from ‘guest’ to prisoner. [And this is where we begin saying. “Watch out for that blond.”] 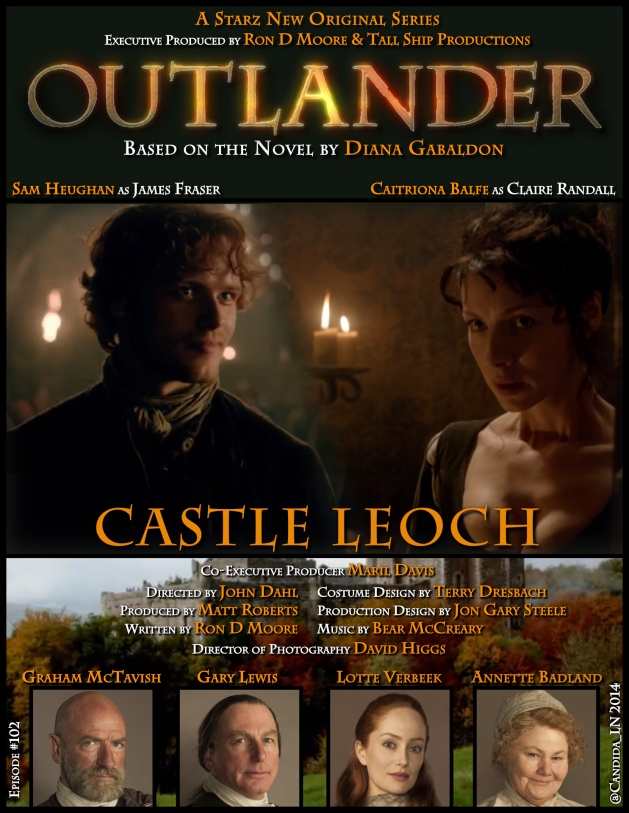 Summary: With Jamie’s (Sam Heughan) assistance, Claire (Caitriona Balfe) tends to an ill child. And during an evening’s entertainment, Jamie translates a bard’s tale about the wife of Balnain, giving Claire hope for her freedom and the return to her own time. As their friendship turns toward intimacy, Claire is surprised to find Jamie locked in Laoghaire MacKenzie’s (Nell Hudson) embrace. After several weeks of captivity, she makes the decision to use her medical skills to aid her escape from Castle Leoch.  [“Told ye to watch out for that blond.”] 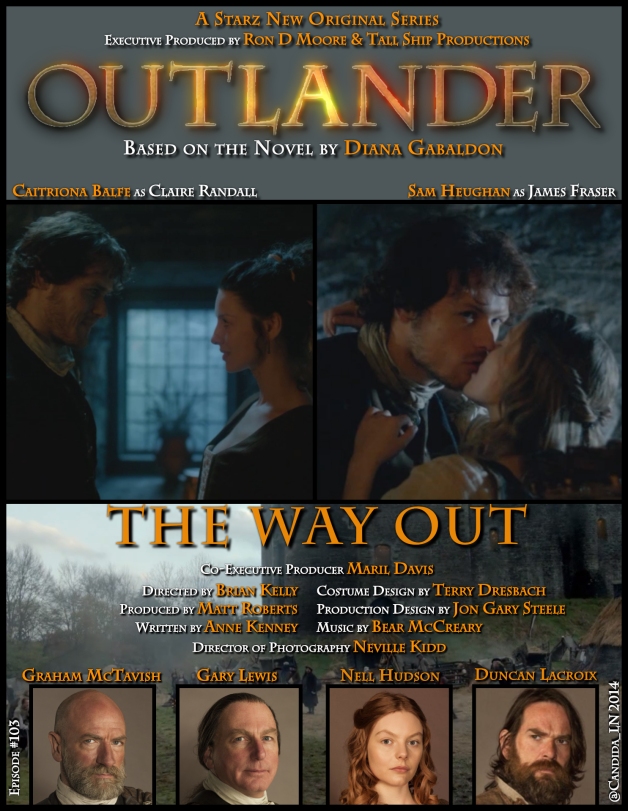 Summary: As the Castle prepares for The MacKenzie Gathering, Claire (Caitriona Balfe) plots her escape. But after a dangerous encounter with a drunken Dougal MacKenzie (Graham McTavish) and an unexpected run-in with Jamie (Sam Heughan) in the castle stables, her plans are dashed. Her foiled escape also has an undesirable result for Jamie who was attempting to avoid swearing an oath to Column MacKenzie (Gary Lewis) for fear of his life. [An action packed episode to be sure.] 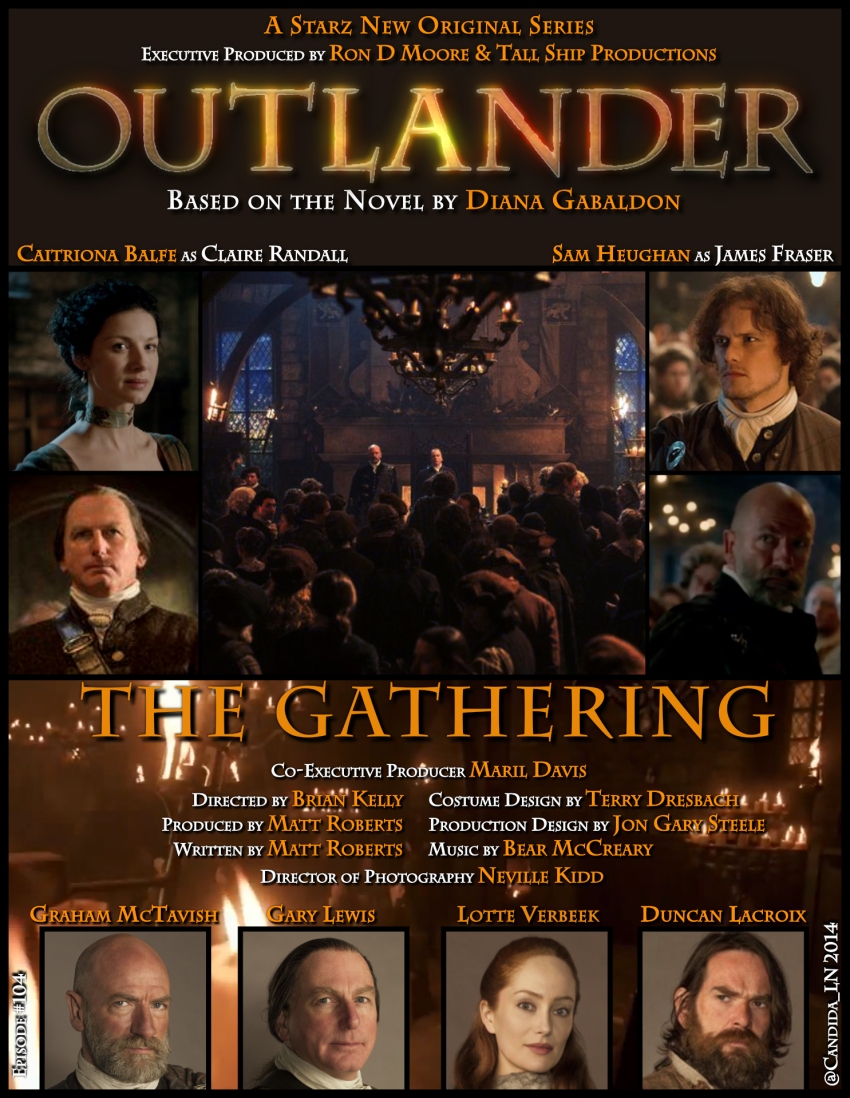 Summary: Claire (Caitriona Balfe) joins the MacKenzie rent-collecting trip, thinking she will never see Castle Leoch again. Her new plan is to slip away and return to Craigh na Dun given the first opportunity. While on the road, she learns more about the history of the MacKenzie clan and makes friends with Colum’s solicitor, Ned Gowan (Bill Paterson) – “a small, elderly man . . . born, bred, and educated in Edinburgh.” During a stop at a tavern one evening, Claire is horrified to watch Dougal (Graham McTavish) use Jamie’s (Sam Heughan) scars to gain sympathy for the Jacobite cause. The incident reminds her that a defining moment in Scottish history is fast approaching. [And we’re two episodes closer to the big night.] 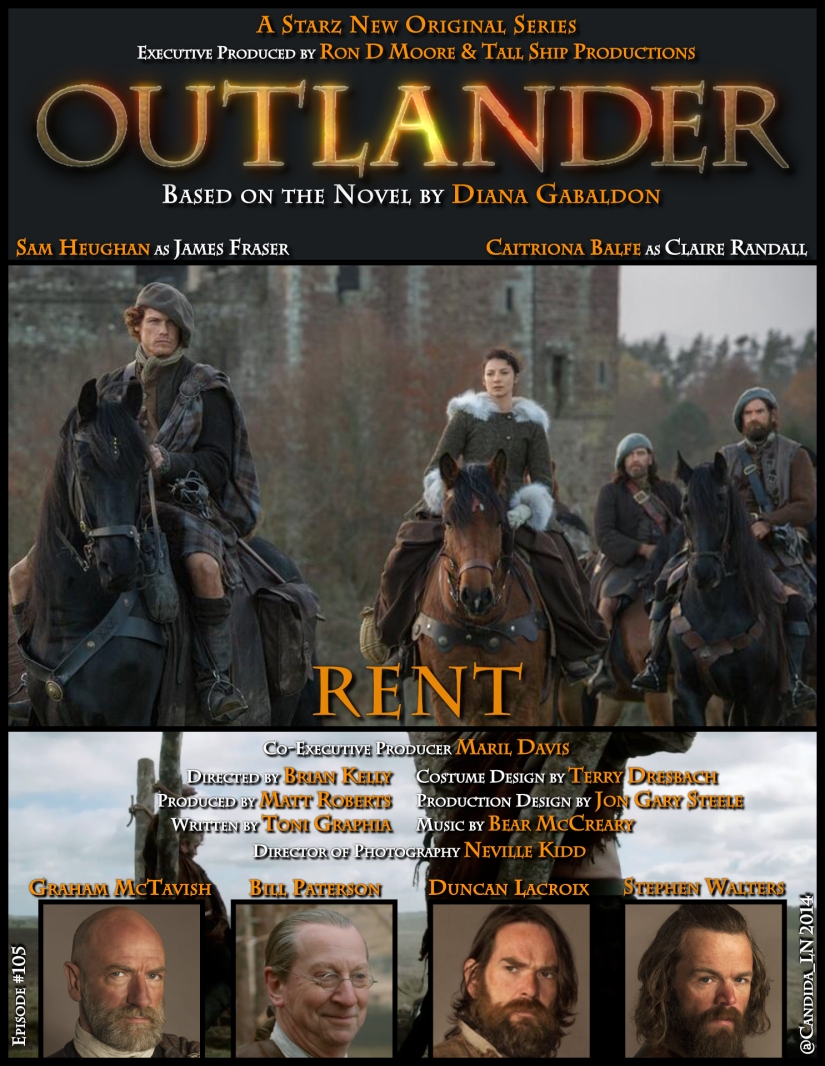 Summary: Claire’s (Caitriona Balfe) unexpected meeting with a British general turns tense when Captain Jonathan Randall (Tobias Menzies) arrives. Claire finds herself alone with Randall – a dangerous man determined to uncover her secrets. [Wouldn’t this be a great episode to have flashbacks of Frank in comparison to Black Jack Randall?] 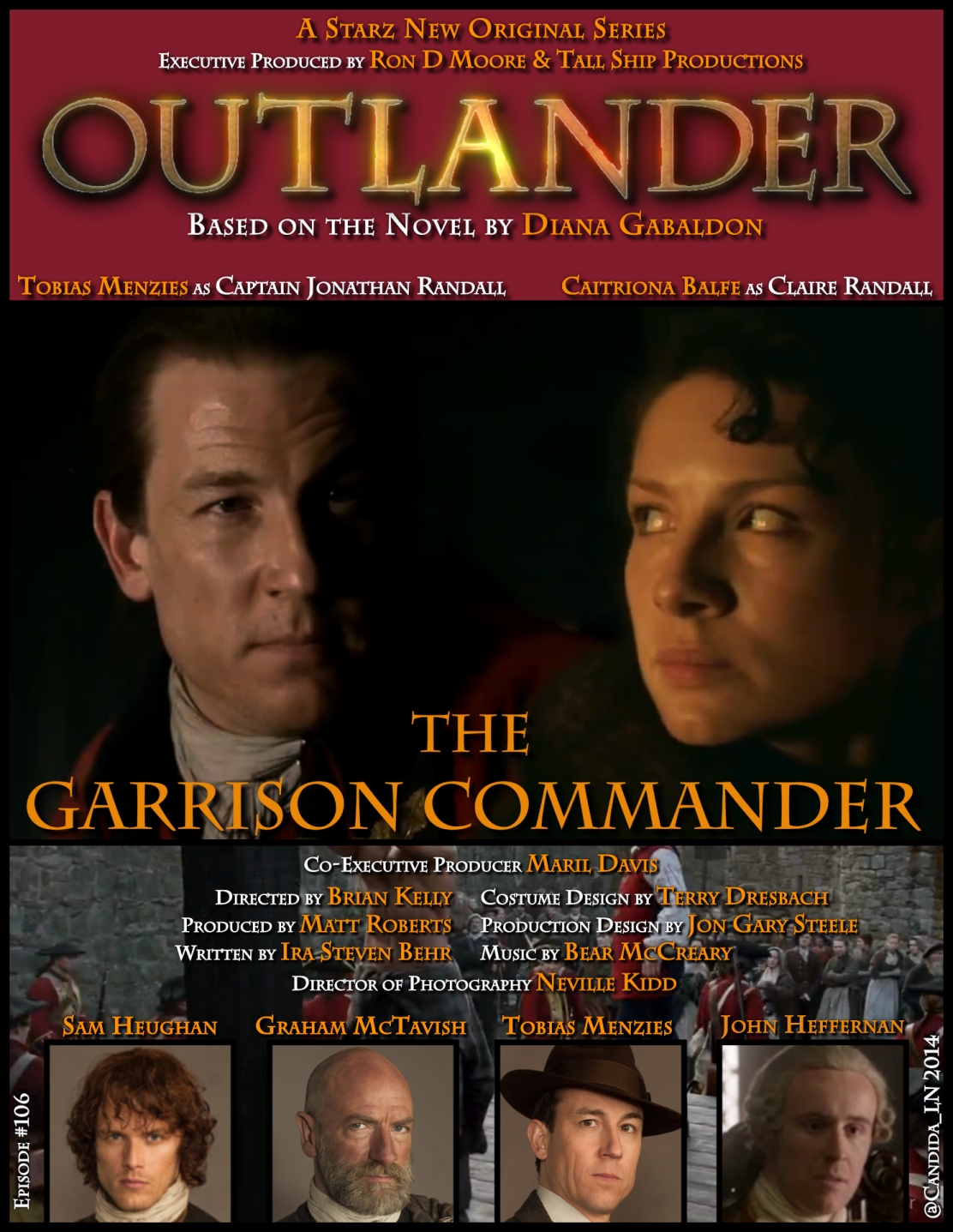 Summary: Dougal MacKenzie (Graham McTavish) offers a shrewd solution to Captain Randall’s demand that Claire (Caitriona Balfe) be turned over to the English for questioning. He offers her the protection of the MacKenzie clan, but only if she marries the young James Alexander Malcolm MacKenzie Fraser (Sam Heughan). [Sigh. Decisions. Decisions.] [Note: The picture of Claire in front of the chapel is my own reation.] 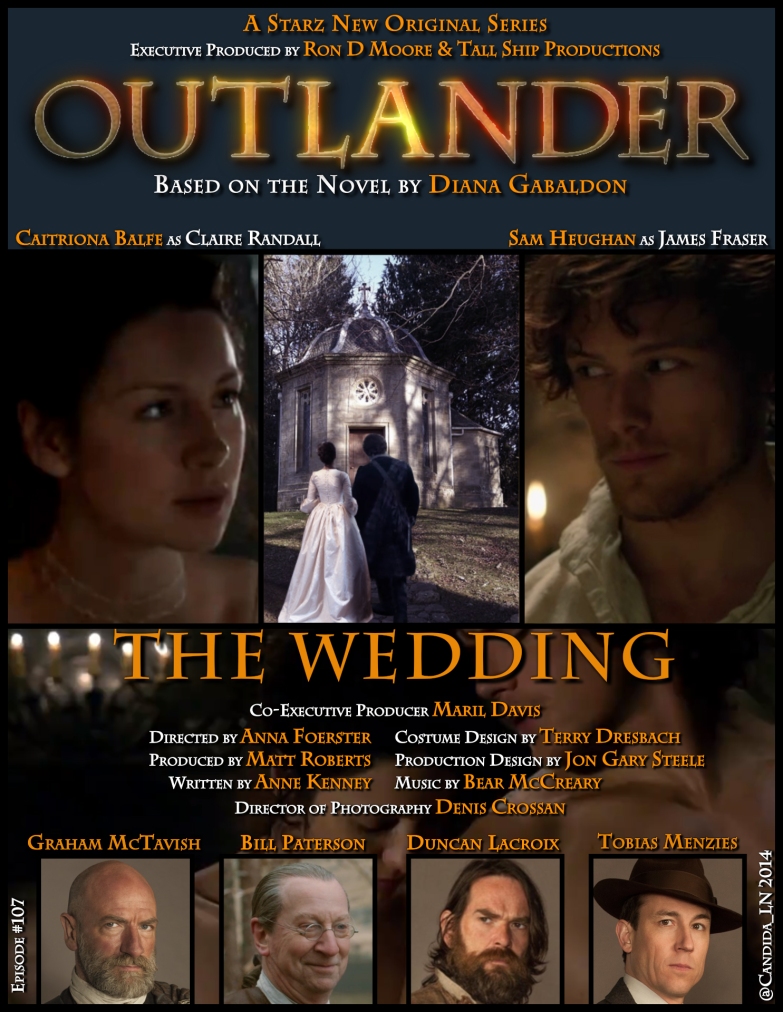 Summary: This description is COMPLETELY fictitious because we’ve been given no information on episode 8 and can tell very little by the title. BUT because it’s the mid-season finale, I am guessing they’ll want to end it with a bang. SO this is my guess . . . Claire (Caitriona Balfe) and Jamie (Sam Heughan) spend their honeymoon at an inn while Dougal MacKenzie (Graham McTavish) continues collecting the rent. They grow closer, and she realizes she can no longer fight her attraction for him. [Am betting this is the episode where we meet Hugh Monro (Simon Meacock).] When Claire is left alone in a glade while Jamie goes off to meet with the man who may be able to clear his name, she makes the difficult decision to return to Craigh na Dun. Once again, her escape attempt fails – this time at the hands of Captain Jonathan Randall (Tobias Menzies). [We’ll find out how far off I am – or not – in 9 weeks!] 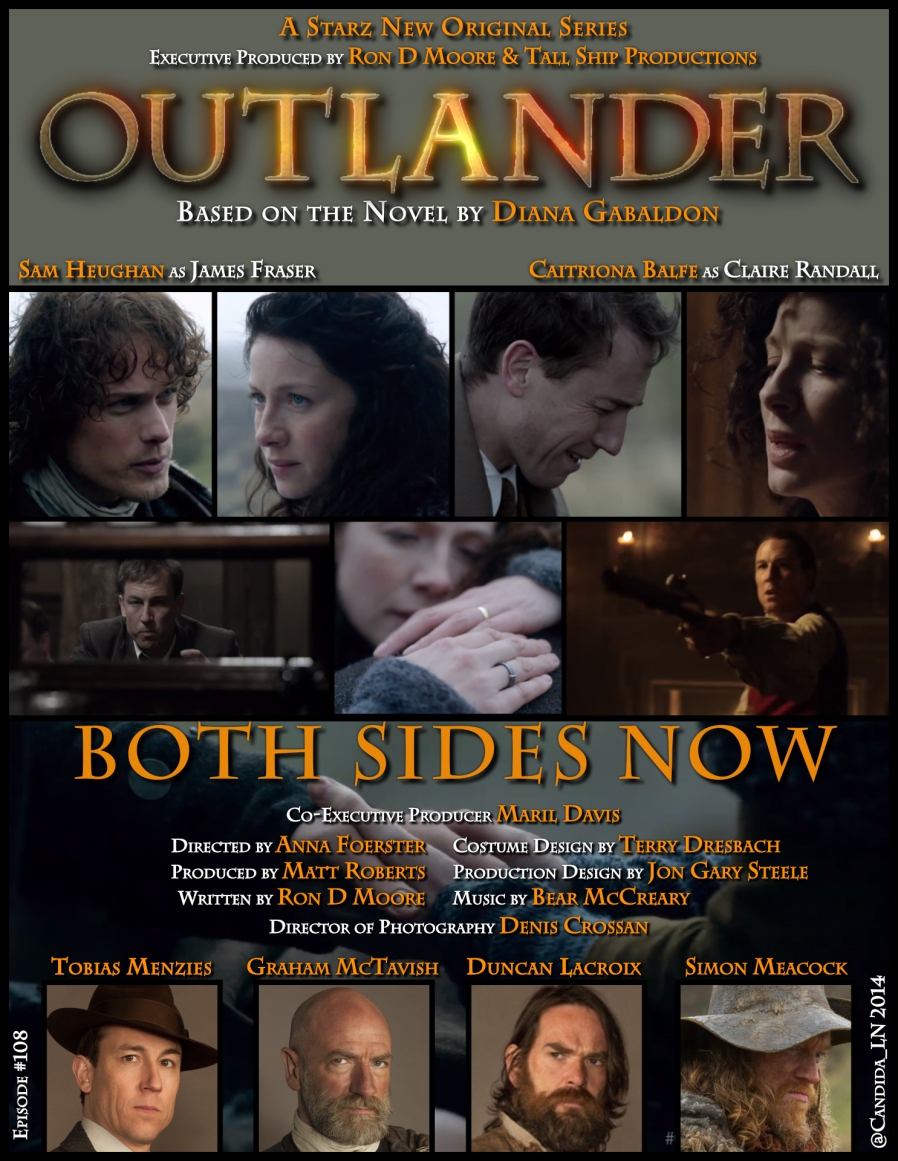