Love at First Sight was the second post I wrote. It told the true tale of a young man enamored of a pretty grocery store clerk in the market where I frequently shop. Recently, the lovely and talented Caitriona Balfe shared a link with us from The Philosophers’ Mail entitled On the madness and charm of crushes. The article sparked a fond memory of my own tale of an unrequited crush, and I thought I would share it with you now.

While attending Purdue University in West Lafayette, Indiana, I drove to Indianapolis with my roommate, Lisa, over the holiday break. As it was Christmas, we decided to do a little shopping and headed to Union Station in the downtown area. The old building, constructed in 1853, had been converted into a quaint shopping center in the 1980s. At some point in time – I don’t know when – the shops were closed, and the historic station now serves as a banquet hall and conference center. 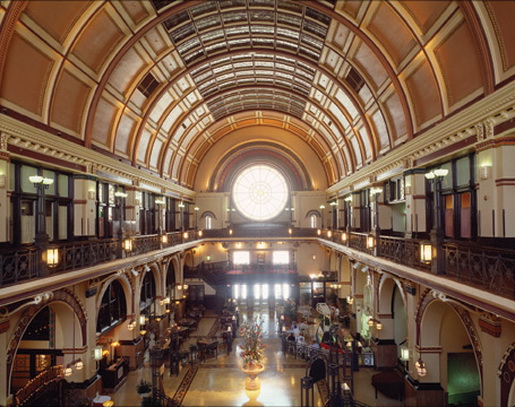 Winter solstice in Indianapolis is not unlike any other midwestern city – cold, blustery, and white. But this story is not about the charming building (pictured above) or the weather. Those are aspects I retain as part of a memory I have treasured and laughed about since its happening. Often I wish it had a different ending, but then it would be a different story. So . . . as it goes.

Lisa and I, dressed in our winter wear, had been browsing for a short time when we entered one particular shop. It sold Christmas decorations, papyrus and such. Once inside, she went her way, and I went mine.

As I was perusing a table of Christmas cards, my eyes were drawn to a man across the shop. He was taller than average with dark hair and dark eyes which I couldn’t tell from a distance but was soon to see up close. The fact he was handsome – at least to me – goes without saying. Dressed in a grey suit and wool overcoat, he was an impeccable sight.

I have never been one to stare at a stranger whom I find physically attractive. That night, I openly stared. I stood by the display table, frozen in place, staring across the shop at the most beautiful man I had ever seen in my life. What was worse – he noticed. At first, he gave me only a fleeting look. But then his eyes returned, and he stared back. I can only imagine the picture I presented – eyes wide and mouth slightly agape. I do not remember if I was breathing.

After what felt like minutes, but was surely only seconds, his attention was drawn away. With him was an elderly couple I could only assume were his parents. They were both shorter than him, probably having shrunk a bit with age, and his mother was asking him a question.

Slowly coming to my senses, I surveyed their immediate vicinity for signs of a wife. There were none. The realization this man alone had brought his parents to Union Station for shopping, exponentially increased his attractiveness.

I forced my eyes to return to their empty perusal of the goods on the table, occasionally stealing a glance. My roommate approached and surprised me from behind.

“What are you doing?” she asked.

I turned to her, relieved to have a friend at my side. Without casting my eyes to the object of my new-found obsession, I whispered, “I was staring at that man.”

Lisa’s eyes did the casting for me. She smiled in his direction then came back to me. “You mean the guy who was hitting on me?”

She held a serious face long enough to make me believe, then she burst out laughing and knocked my shoulder with the back of her hand. I chuckled with her to keep from tying her blond hair around her neck.

“B—-,” I thought to her retreating back as her laugh trailed off. I was left alone again.

I turned back around but the man and his parents were gone. Deflated, I tried to concentrate on the Christmas card display in the middle of the aisle. Moments later . . .

“Excuse me,” a voice said from behind me.

It was neither alluring nor particularly familiar, but something cautioned me. I turned around to find myself staring at the knot of a blue tie. I am 5’8″ – probably closer to 5’10” with my winter boots, so you’re given an idea of his true height.

Slowly – time was stretching again – I tilted my head back to find the man across the shop now standing with me breast-to-breast. There was very little space between the card display and the end of the row. I know now, he could simply have gone around to the other side of the table, but my mind was not working properly at that moment.

I can’t recall what his cologne smelled like nor the fragrance of his skin, though I’m sure it was something masculine and enticing; or so, I’ve allowed myself to maintain. I do remember his eyes and his smile – the two features of a man which have always told a woman almost everything she needs to know.

I was 21 or 22 at the time and not a good reader of men’s faces or their age. I’m not very good at it now either, but I’m fairly certain he was in his late twenties. His dark eyes held amusement, and his smile appeared to be genuine. I think, or rather hope, he was more flattered than entertained by my reaction to his nearness.

Speechless, I resumed my staring. The man stood inches from me, more real than when he was across the shop. If he had said, “Hello,” would I have responded in kind? Was he teasing me or testing the waters? These are questions I have asked myself over the years.

Instead of speaking, I pressed myself back against the table to allow him passage, keeping my eyes locked on his face. He squeezed himself into the small space between my body and the display shelf behind him. If the season had been summer, the passing might have been considered indecent. As it was winter, our coats did the caressing.

I’m sure there were several thoughts flowing through my mind as our bodies touched, but I can only recall one to this day.

“Can I have your children?” I said with my eyes.

Luckily, I’ve never been one to spout off whatever is on my mind, so I remained mute as he slid past me with his smile never wavering. It’s an odd thought for me to have had because I’ve never wanted children, nor have I ever met someone who made me want to have children – except for that man.

I wish I could say I thought of something clever to ask or that I reached my hand out to stop him, but I didn’t. Neither did he say anything beyond “Excuse me.”

The man of my dreams passed within my grasp then rejoined his parents. I followed them to the exit and stopped under the arched doorway, watching them walk across to another shop. His mother stopped to look in a window. He stayed beside her, but turned back to look at me.

Once again, we stared at each other with the smile returning to his face. His attention was pulled away for a moment, then his eyes were back on mine. What was he thinking, I have always wondered? For myself, I remember feeling . . . panic. I didn’t want him to walk away, but did not have the nerve to speak to him. I wanted to know, at the very least, his name.

His parents by now had noticed their son’s attention was split. His adorable mother turned and looked in my direction. She smiled at me. Perhaps it was an every day occurrence for her to see a young woman stare after her son, but it was certainly not a common event for me.

In my dreams, he walks across the station and speaks to me. I find my voice and say something eloquent back to him – as eloquent as a 22-year-old engineering student can be. Of course, this leads to a romantic dinner and a happy ending.

In reality, the man and his parents walked off.

Not since that day have I wantonly and foolishly stared at a nameless man with such audacity. I have never wasted time thinking we were ‘meant to be’ because our meeting was as it should have been – fleeting, memorable, perfect.

Does he ever think of me? I have wondered many times. If only . . .